4 New Heroes will be revealed at the upcoming PAX East Event. 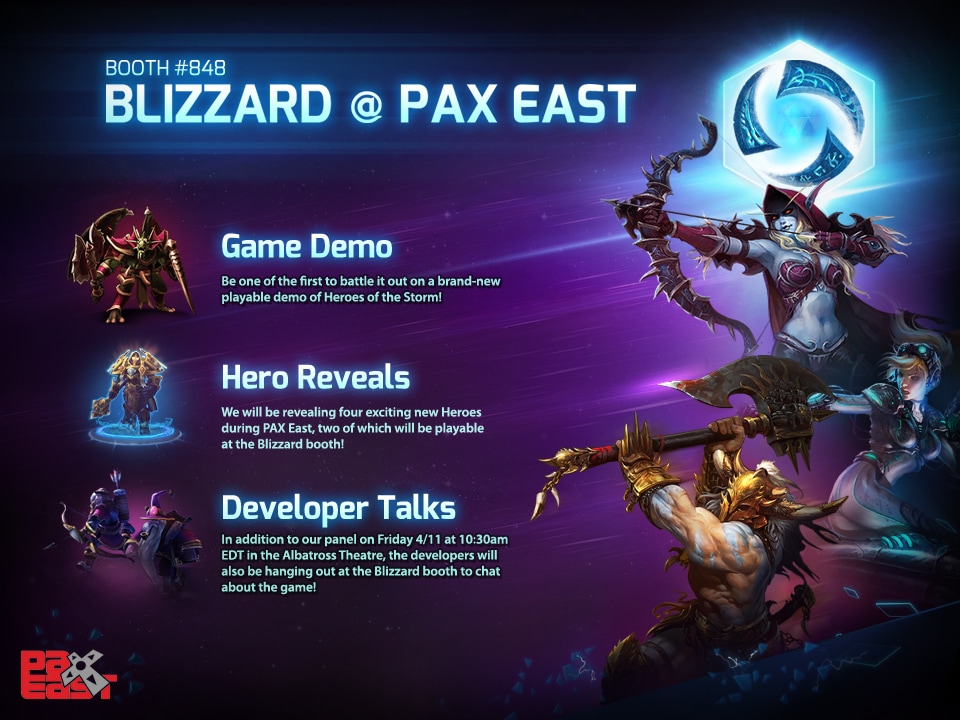 We’re gearing up to storm PAX East 2014 in Boston, Massachusetts and we’ve got more Heroes content for you than Stitches himself could consume. Read on to get a preview of everything awaiting you at the convention from April 11 – 13. Source

Heroes of the Storm: The Ultimate Blizzard Mashup

Take a break from real life and warp into the Nexus with our live discussion panel, Heroes of the Storm: The Ultimate Blizzard Mashup, in the Albatross Theatre at PAX East this weekend. During the panel, Game Director Dustin Browder, Senior Producer Kaeo Milker, and Senior Artist Phill Gonzales will be sharing a sneak peek at several exciting new heroes and skins, as well as answering questions from the audience. Once the panel wraps up, Kevin Knocke will join forces with Dustin Browder to get your heart racing with a fresh Heroes of the Storm showmatch commentary where you’ll be able to see the new heroes in action!

Stop By and Play Heroes

While you’re cruising around the show floor, don’t forget to visit us at Booth #848, because we’ll be rockin’ all weekend long with swag giveaways,  Heroes shoutcasts, and interviews with PAX attendees — but that’s not all. We’ll also have a full-blown Heroes of the Storm play area, featuring a special, PAX-exclusive build where you can get some hands-on experience with a couple of brand new heroes! Come hang out at the booth to pick up a few goodies and get your brawl on with other attendees.

Don’t worry if you’re not able to make it to Boston this year, because we’re bringing a bit of the PAX East experience directly to your front door. We kicked off our PAX Pack Giveaway earlier this week, and you can enter to win an epic assortment of Heroes gear by interacting with the official Heroes of the Storm Facebook and Twitter pages. Head here to enter and get all the juicy giveaway details.

We’ll be recapping every bit of Heroes action from PAX right here on the official Heroes of the Storm website, so make sure to check back in frequently throughout the weekend to get all the latest details. What’s more, you may wish to check out Heroes on Facebook and Twitter this weekend, because we’ll be sharing Heroes booth coverage, videos from the convention, and much more so that you can stay on top of Heroes news in real-time over the next few days.

That’s a wrap for our pre-PAX coverage, because we’ve got a plane to catch. Join us on the live stream during the panel and, if you’ll be at the show, be sure to say hello at Booth #848.

We’ll see you at PAX!