Heroes of the Storm Preview: Unlocking the Hero Within

Written by Medievaldragon on March 12, 2014. Posted in Heroes of the Storm

The massive info on Heroes of the Storm has been rolled down like an avalanche with the latest preview posted by community manager Vaeflare. We learn how gold is acquired, and features we hadn’t heard of before.

As Blizzard prepares to launch Technical Alpha, fans around the world who got an invite are anxious and spamming F5 to find out if their account has been flagged. Blizzplanet is among those awaiting, but there have been reports that some influencers have already gotten access, which means Technical Alpha is imminent within the next few hours.

We recently announced the upcoming Technical Alpha for Heroes of the Storm, and in the meantime we wanted to dig into the details surrounding our current plans for heroes, skins, mounts, our experience and progression system, and more!

In Heroes of the Storm, you’ll be able to take control of a variety of powerful heroes from across Blizzard’s expansive universes. These heroes can be obtained in a variety of ways.

If you’re itching to try out a new hero or wreak havoc with a familiar favorite, each week you’ll have the option to choose from five heroes that will be freely available in our weekly hero rotation. Once you accumulate enough experience and reach Level 7, you’ll also unlock an additional weekly hero rotation slot, giving you a total of six free heroes to choose from each week. The hero rotations are updated every Tuesday, so make sure to check-back often to see which weekly heroes are available for free-play. 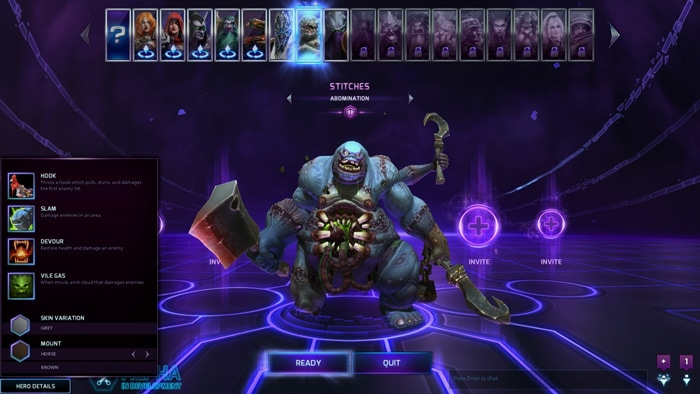 If you’re interested in adding a hero to your arsenal permanently, you’ll also be able to purchase heroes using a currency called gold which you’ll be able to earn by completing in-game objectives. Players will unlock the ability to start earning gold at Level 5, and you will be awarded more of this valuable currency as you level up, as well as for completing Daily Quests, which are unlocked at Level 6.

Whether or not a hero is currently on rotation, you’ll also be able to take them out for a test drive using our “Try Me” system. This system allows you to test out individual heroes on a closed custom map where you can try out different abilities and talents at your leisure, away from the non-stop action of regular games. You’ll be able to toggle minions and bots, refresh forts, repick Heroic Abilities, and clear cooldowns to your heart’s content, which should give you a good feel of what to expect when you take your favorite heroes out onto the field of battle. 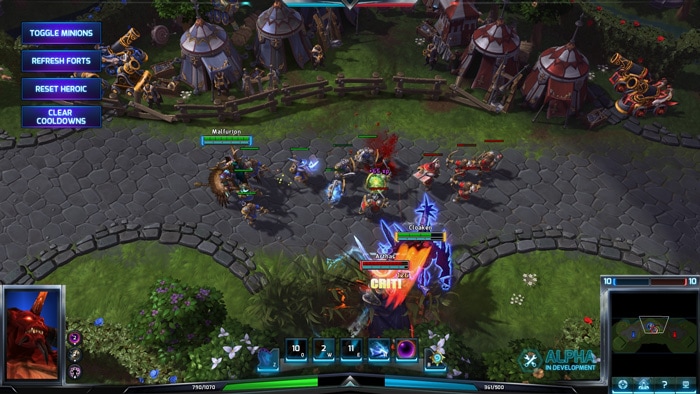 If you’re eager to unlock a hero, you’ll also be able to purchase one with real money. Additionally, players who pre-order Diablo III: Reaper of Souls will be granted a future unlock of Valla the Demon Hunter at no additional cost.

If a plethora of iconic Blizzard characters wasn’t enough, you will also be able to unlock and purchase a variety of custom appearances that will help you stand out among friend and foe and infuse your personal flavor into the Nexus universe. 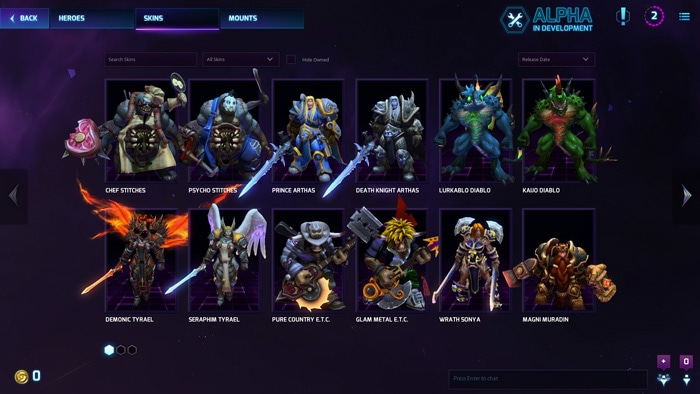 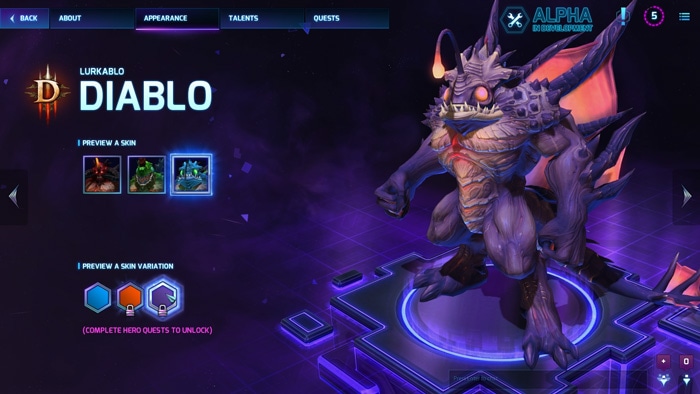 While each hero will have a free base skin associated with it, there will also be a variety of exciting additional skins available for each hero! These skins can be obtained in several ways. Some can be purchased with real money, and going forward we plan to not only give away skins at events, but we also intend to eventually award an additional skin for heroes after players have completed an individual hero’s sixth Hero Quest. 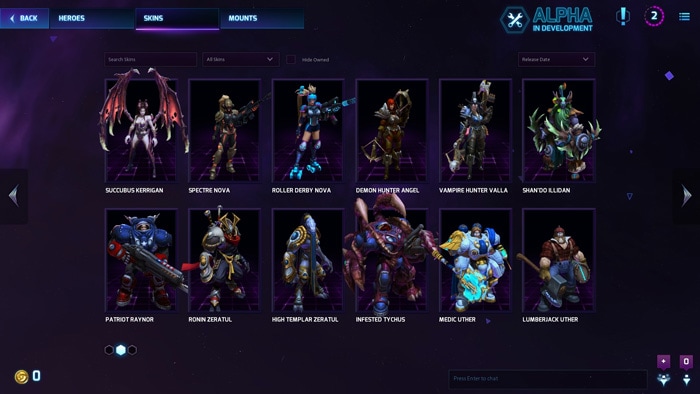 Like a hero’s original color tint, each skin’s two additional tints can be unlocked for individual heroes through Hero Quests.

Eager for a little extra speed? Our fresh take on the team brawler also includes a mount system that is a sure-fire way to get you where you need to go in the Nexus. A variety of exciting mounts will be available to players to customize their look as they charge into the fray of battle, or chase down that fleeing enemy hero.

Each mount will include at least three available tints. The first is immediately available, and the remaining two tints will be unlocked for individual heroes after completing their fifth Hero Quest. All players will start with a free horse mount, and additional mounts can be purchased with real money. In addition, a unique mount will also be given as a reward to players who make a real money purchase during the Alpha and Beta phases of testing.

As you can see, increasing your overall Level carries with it some great perks, such as being able to earn gold, which enables you to unlock heroes and work towards completing their individual Hero Quests, which in-turn awards you with unlockable skins and tints.

You will be able to increase your Level by earning experience, and there are a number of ways to do so. Each time you play a game of Heroes of the Storm, you’ll have the ability to earn experience based on your achievements in-game, as well as a win bonus for players of the winning team, and a friend bonus that is granted when you are teaming up with your Battle.net friends. 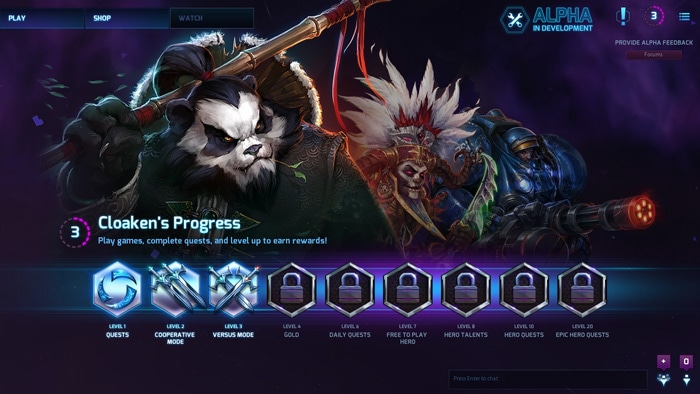 Players will also be able to gain experience by completing quests. Daily quests are unlocked at Level 6, and from that point onward, players will be able to get one daily quest per day, and they will have the option of having up to a maximum of three daily quests active in their log at any given time.

In addition to completing daily quests for bonus experience, players will also be able take up the challenge and embark on Hero Quests, which are unlocked at Level 10 and 20. The first set of these quests, unlocked at Level 10, will allow players to dig into individual heroes and complete a series of three Basic Hero Quests (Hero Quests 1, 2, and 3). After reaching Level 20, players will be able to progress their individual characters through a series of Epic Hero Quests (Hero Quests 4, 5, and 6). Keep in mind that completing Hero Quests will not only award you with experience, but completing specific Hero Quests will also unlock additional ways to further customize the appearance of your favorite heroes and mounts this side of Azeroth, the Koprulu Sector, Sanctuary, and beyond!

We’re excited for the months ahead, and we hope you enjoyed this first look into our current plans for heroes, skins, mounts, and our experience and progression system in Heroes of the Storm! Please keep in mind that as Heroes of the Storm is still under development, our plans may evolve as the game moves towards release, and we’ll be sure to share additional details with you as they become available.

If you’re interested in learning more about the Technical Alpha, please make sure to check out our FAQ.